It has been a fascinating start to 2016. The American primaries are well and truly underway; the EU referendum for Britain has been announced for 23rd June 2016, the crisis happening in the Middle East is increasingly complex and raising political tensions on a global scale. Throw into the mix things like #BlackLivesMatter, the illusive Transatlantic Trade and Investment Partnership (TTIP), the increasingly regular practise of no-platforming speakers for alleged ‘microaggressions’, including Germaine Greer, Peter Tatchell, Milo Yiannopoulos and Richard Dawkins, and you could be forgiven for thinking that divisiveness and controversy is the order of the day.

What is the Larnaca Statement?

“Thirty Palestinian Christians and Messianic Jews met in Larnaca, Cyprus, January 25-28, 2016 for four days of prayer, fellowship and study. They issued a statement affirming their unity as believers in Jesus and calling on their communities to join them in reconciliation initiatives.

The Lausanne Initiative for Reconciliation in Israel/Palestine (LIRIP) hosted the conference. Its vision is “to promote reconciliation within the body of Christ and our wider communities in Israel and Palestine by creating a network that encourages, under the auspices of the Lausanne Movement, models of gospel-based, Christ-centered reconciliation that will have prophetic impact in relation to the Israeli-Palestinian conflict.”

The situation with Israel and Palestine is complex and regardless of individual perspectives on the ins and outs of the situation, it can generally be agreed that it often feels like this is a situation of political gridlock with no easy solution to provide an enduring peace. However, these 30 people from different communities either side of the divide have stepped out in faith to try and begin a process which can start the difficult journey to reconciliation.

I highly recommend that you read the statement for yourself and, if you are so inclined, pray for these individuals, their communities and the overall situation. That said, here’s a couple of my highlights and reflections.

Section 1: We affirm our unity in the body of the Messiah

This section is fascinating because it holds in tension two equally strongly held and shared views. The first is that they are united by God through the Holy Spirit. The second, this ‘unity embraces [their] diversity as Messianic Jews and Palestinian Christians within the one body’ (1.3). This tension is very real, and it is one which is maintained throughout.

It’s also important that this statement hasn’t just come out of the blue, but seeks to build on work which has happened before. 1.6 states:

“In the light of these and other Scriptures, we affirm the following paragraphs of the Cape Town Commitment.

Love for one another in the family of God is not merely a desirable option but an inescapable command. Such love is the first evidence of obedience to the gospel, the necessary expression of our submission to Christ’s Lord ship, and a potent engine of world mission.

We lament the dividedness and divisiveness of our churches and organisations. We deeply and urgently long for all followers of Jesus to cultivate a spirit of grace and to be obedient to Paul’s command to “make every effort to maintain the unity of the Spirit in the bond of peace.”

Section 2: We commit ourselves to live out that unity in the midst of conflict and division, and we call on our communities to join us in this commitment.

There’s lots of interesting things in this section, but my highlight is 2.4. This subsection details some commitments to certain responsibilities, such as to affirm and respect each other, and to treat one another with love, gentleness and patience. More than this,

“We will refuse to denounce, dehumanize, or demonise one another or our respective communities. We will not “bear false witness against our neighbours”, “spread false reports” or “follow the crowd in doing wrong” (Exodus 20:16; 23:1-2). We will refrain from spreading gossip, rumours, slander, unfounded allegations and lies – whether by word of mouth, in print, or by social media, blogs, etc.”

This is a big deal. The social media campaigns of each side against the other are tantamount to state and civic sponsored propaganda machines, firing out a peculiar mix of misinformation, statistics, stories and arguments at one another. It’s not uncommon for those who are connected on social media with people on both sides to see the same statistics or images posted by both sides but with different captions framing their import to their respective narrative.

The blogging community on both sides is incredibly active and there’s a degree of skill required to keep one’s finger on the pulse and to stay on top of who has said what and who responded to whom, directly or indirectly. As such, this commitment by these Thirty, and which they are inviting others to join with them in, to refrain from the spin and ‘churnalism’ of the online culture is significant. Hopefully by reducing the gossip, rumours, unfounded and unverified allegations the online community can continue the ongoing dialogue in an increasingly positive and constructive way.

What this statement doesn’t say is, ‘we will not disagree with one another’.

That’s equally important because they are not denying the fundamental differences of opinion on the situation. They are not claiming that the way forwards is for one side to capitulate to the other but rather seeking to ‘maintain fellowship with each other’ (2.4.5), to essentially act in good faith so that discussions, challenges and engagements can be done in a legitimate manner in order to try to start moving forwards.

Section 3: We recognise the following areas of challenge and disagreement.

This section goes further in acknowledging ‘deeply held theological convictions’ which ‘disagree at some fundamental points’ (3.3.1). However, in section 3.3.3. they say:

“Even though we are convinced of our own positions and wish to continue to dialogue with and challenge one another, we will not require others to change their position and accept ours as a pre-condition of our fellowship.”
(Emphasis mine)

Peace and reconciliation will not be achieved through ideological and theo-political hegemony. Any hope of reconciliation has to be grounded in something greater; namely, the Gospel of our common Lord Jesus. This, then, is an invitation to fellowship in spite and because of intense disagreement.

Following this is a commitment to ‘clarify our positions in situations where they might be interpreted in a way that harms or excludes others’. They then clarify, briefly, some of these positions from each perspective. If you don’t know much about the opposing views then this is a helpful introduction to some of the similarities and differences between their respective narratives. 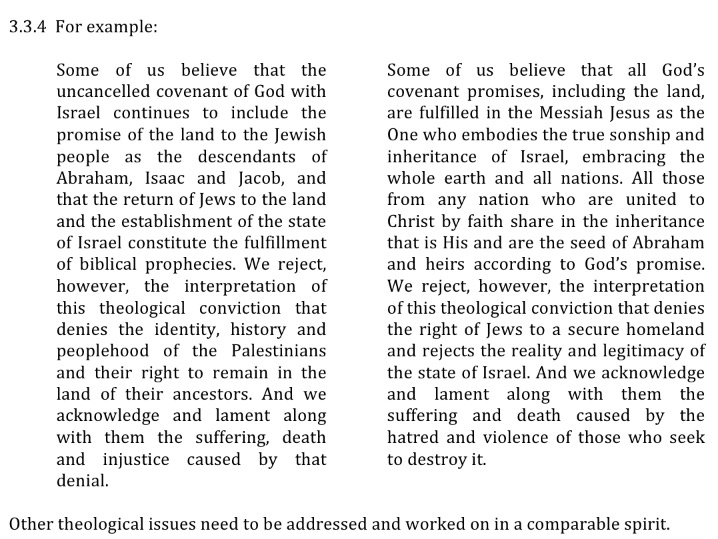 I’m given to understand that this section, along with the following on cultural narratives, dealing as it does with the positions of most disagreement was the most difficult aspect of the statement to finalise and unanimously agree on. The other section where each side presents their respective cultural narratives is as follows :

As is easily apparent, the theological and cultural narratives are mutually interconnected and naturally re-enforce one another, over and against that of each other’s cultural narrative and theological stance. It’s worth observing that there’s no answers provided here. Just how the ‘inclusive, bridging narrative’ might look is unclear. However, the desire ‘to listen to one another… respectfully challenging the narrative of the other’ is a positive start.

In the light of this, section 4 looks to identify practical ways of starting to move forwards.

Section 4: As believers in Jesus, we renew our biblically grounded hope for the future, we affirm our belief that the gospel can change people and situations, and we accept that we have a role to play in this process.

There are ten different subpoints, and most of them are solid principles for general Christian conduct which even those of us who are not directly involved in this situation would do well to learn from and ‘imitate as they imitate Christ’.

The one which stands out to me, though, is:

4.3 [We commit ourselves to…] make our best efforts to meet in friendship.

A potentially difficult friendship, for many reasons. However, the Lord Most High of the Judeo-Christian Scriptures,

‘…showed his great love for us by sending Christ to die for us while we were still sinners. And since we have been made right in God’s sight by the blood of Christ, he will certainly save us from God’s condemnation. For since our friendship with God was restored by the death of his Son while we were still his enemies, we will certainly be saved through the life of his Son. So now we can rejoice in our wonderful new relationship with God because our Lord Jesus Christ has made us friends of God.’
(Romans 5.8-11 NLT)

From this intention of friendship, the statement, endorsed unanimously by the Thirty who were present, conclude with this:

“We invite both of our communities in the land and outside it, along with the worldwide family of God, to join us in prayer, both that we may be faithful to the affirmations and commitments expressed here, and that the ongoing work of this initiative may bear fruit for the kingdom of God and His glory.”

They are not speaking for their communities per se, but rather they are inviting them – and us!- to join in with this Larnaca Statement and to prayerfully seek peace, reconciliation and unity.

This heart for unity seems to be the aching spiritual desire for Christians the world over. Larnaca has drawn on John 17 and the prayer of Christ for all believers in Section 1.1., Pope Francis and Patriarch Kirill refer to the same in Section 5 of their statement, and the Anglican Primates are implicitly motivated by it in the fourth paragraph of the Communiqué: “the unanimous decision of the Primates was to walk together, however painful this is, and despite our differences, as a deep expression of our unity in the body of Christ.”

In a world of personal hurt, of political squabbling and campaigning, of violence, disorder, controversy and division; may the Spirit of the risen Lord Jesus bring the saviour’s hope to fruition:

“I am praying not only for these disciples but also for all who will ever believe in me through their message. I pray that they will all be one, just as you and I are one—as you are in me, Father, and I am in you. And may they be in us so that the world will believe you sent me.

“I have given them the glory you gave me, so they may be one as we are one. I am in them and you are in me. May they experience such perfect unity that the world will know that you sent me and that you love them as much as you love me. Father, I want these whom you have given me to be with me where I am. Then they can see all the glory you gave me because you loved me even before the world began!